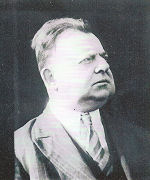 Born in West Farnham, Quebec in 1876, Moise Potvin was the oldest of 17 children. At the age of three he was already exhibiting an unusually gifted talent that was evident in his drawings of livestock, common in the rural area in which he lived.

Since the only formal training at the time was to be found in Montreal or Quebec City, Moise remained, for the most part, self taught, drawing upon the environment and experiences to provide material for his work.

In 1891, his parents immigrated to the Arctic section of West Warwick, R.I. As the oldest child, he entered the textile mill and began to learn the trades of weaver and loom fixer. He worked in these trades for about 15 years. During this time he continued to dabble in drawing, painting, theatricals, and especially carving.

He married at age 20 and moved with his new bride, Arcelia Forand, to Woonsocket. He played parts in various amateur plays that were under the direction of Victor Vekeman. Moise was lonesome for his family and returned to West Warwick around 1900 and started an acting troupe entitled The Ten Potvins Dramatic Company. The troupe acted in Rhode Island, Massachusetts and Connecticut.

He eventually returned to Woonsocket where he edited a small publication entitled Le Charivari. This “sheet” as he called it, published short, funny stories and jokes. He also started a small sign painting shop to help support himself and his family. During these years he began making violins on the side.

Potvin eventually quit the sign painting business and started a small violin shop on Main Street, where he made and repaired these instruments. Moise made 160 violins and repaired over 1,000.

Throughout these years Potvin continued to carve. His years of rebuilding looms, and vast knowledge of gear, wheel, and cog movements proved instrumental in his artistic career when he created animated scenes depicting his life and the experience of the French Canadians made entirely of wood. He used some 92 species of wood from around the world.

In 1925 he gathered these marvels and joined in partnership with George Fleurant to exhibit this extraordinary collection. That year they left for the Boardwalk in Atlantic City, where they remained for 16 months. From there they took their exhibit to New York City, and eventually to over 100 cities in the United States, and to the principal cities of Canada.

Potvin also developed a passion for clay modeling. He recieved many commissions to make busts of celebrities, and political leaders.

Moise Potvin died at the age of 72 on December 12, 1948. He is buried in Precious Blood Cemetery in Woonsocket..