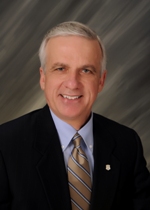 Marc A. Cote is a Rhode Island state senator who represents Woonsocket and North Smithfield. He has earned the support of the electorate in those communities for the past 24 years.

His many accomplishments in the State Senate include working with the education department to approve the establishment of the Beacon Charter School in Woonsocket. He also worked with the local delegation to secure funding for the new Woonsocket Middle Schools.

He successfully advocated for the implementation of a real-time bill tracking system on the State’s website that allows the public to subscribe and be promptly notified by email of any committee or floor activity regarding specific legislation of interest to individual citizens.

A strong supporter of veterans’ issues, Senator Cote sponsored and achieved passage of legislation that gives veteran-owned small businesses a preference in securing State contracts for goods and services needed by the state.
For his efforts Marc has received the Friend of Small Business Award from the National Federation of Independent Business.

In addition to his public service, Marc is also a licensed broker and partner in firms active in the sale of residential and commercial real estate.